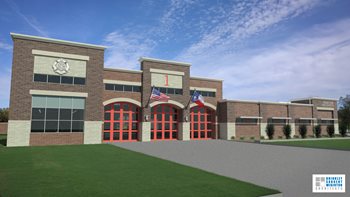 The beginning of construction on a new fire station is the latest evidence of Fairview, Texas’ investment in community infrastructure and safety. Local voters overwhelmingly approved a $7.6 million bond package in 2019 to fund the new 14,708-square-foot facility, which will replace the current portable and metal structures housing Fire Station No. 1. The Town of Fairview Community Development Corporation (CDC) has committed to provide $3.3 million toward the debt, representing the CDC’s largest community financial contribution to date.

“The CDC is one of multiple funding sources that were combined to repay the bonds without increasing taxes,” explains Sim Israeloff, president of the Fairview Economic Development Corporation/Community Development Corporation. “The CDC is funded by sales taxes and authorized to spend money on a variety of infrastructure and lifestyle projects that improve the community and, in a general and indirect way, contribute to economic development. A public safety facility like this new fire station is a very viable project for the CDC, and our board approved it unanimously.”

Morale Booster for Firefighters
Designed by Brinkley Sargent Wiginton Architects of Dallas, the new station is being built by Fort Worth-based Byrne Construction Services on a portion of the town-owned 6-acre tract north of the current Station No. 1 site at 500 State Highway 5. The building will sleep seven firefighters with the capability of expanding to 10 and will house the department’s administrative offices. Completion is expected in about a year.

Fairview Fire Chief Jeff Bell says the new facility will be a major morale booster for his Station No. 1 firefighters, who have been working for years out of quarters that have included trailers, a metal building and other older town structures. “The trailer that our Station No. 1 firefighters currently occupy has windows overlooking the new site,” Chief Bell notes,” so I’m sure they will be watching the construction progress from their windows.”

A second station, home base to EMS emergency services, was built to accommodate residential growth in the eastern part of Fairview 10 years ago. The entire department consists of the two stations, one engine, a ladder truck, an ambulance, 23 full-time firefighters, approximately 10 part-time firefighters and two full-time administrative staff members.

Other Fairview CDC Projects
The Fairview Economic Development Corporation (EDC) and Community Development Corporation were established in 2004 by a vote of local residents. The CDC’s first project was a partnership with the town and the EDC to provide economic incentives to create Fairview Town Center through a “380” agreement, which mandates that the center is funded purely from the project itself.

Since then, other Fairview CDC projects have included funding for a number of community amenities that make Fairview a desirable place to live and work, including: Veterans Memorial Park, several neighborhood park playgrounds, the Fairview Youth Theatre, Movies in the Park, the Fairview Half Marathon and 5K, Town Hall Christmas decorations and Fairview’s Christmas Celebration and Tree Lighting.