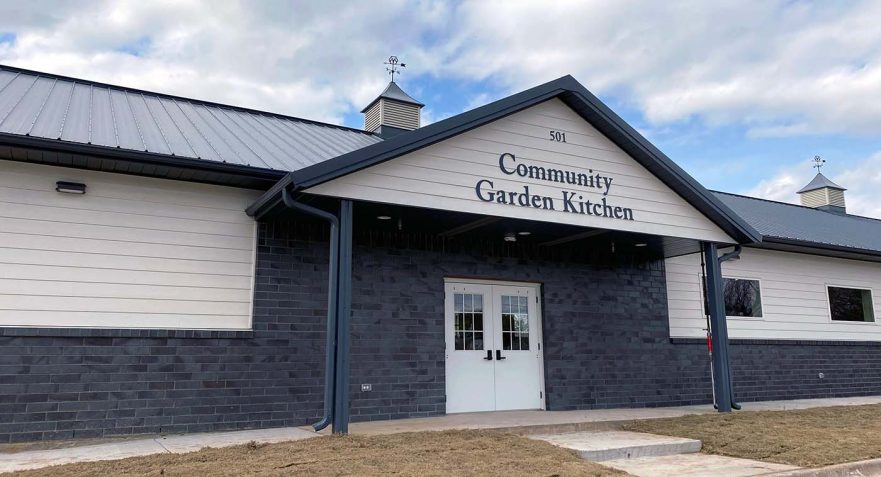 Seven years ago, Angela Poen sat with friends around her kitchen table for a bible study. Sipping coffee and enjoying good conversation, the topic transitioned to hunger in the community. At the time, the women didn’t think there could be much of an issue in their thriving Collin County community.

They began to research the numbers and discovered that 1 in 4 children in McKinney ISD faced food insecurity. That’s over 8,000 children who may not have access to a meal at night, or on school breaks, or in the summer. Angela shared, “We knew about the free and reduced school lunch programs and we knew about local food pantries. We thought, surely there’s a place in Collin County that’s also providing prepared meals to these families. But, there wasn’t.”

Angela remembers this part vividly: She was pouring coffee and said, “We’ll just have to raise the money and build one.”

That one simple statement set forth what would eventually become Community Garden Kitchen (CGK), a 501(c)(3) located near McKinney’s historic downtown on the campus of Holy Family School. The 4,800 square foot building will soon begin serving nutritious meals to those in need. It’s a project years in the making, with learning curves, obstacles and generous gifts each having played a role along the way.

When we first started this project,” said Angela, “one of the first questions we asked ourselves was, ‘Where are we going to get land in Collin County and how will we ever afford it?’”

A partnership with Holy Family School was the answer. During the day, the students and staff will use the facility, and in the evening the kitchen and dining room will be open to guests in need. The Episcopal Diocese, which has supported the school from its inception, has generously leased the land to the Community Garden Kitchen. Angela shares, “We have a 20-year lease and we pay $10 a year. The land is in an area of need, too, walking distance for many people.”

The partnership with Holy Family School and the adjacent land is just one of the many ways that Angela believes God’s hands have been upon the project from the very beginning. “I remember when I was holding that coffee pot years ago and said, ‘We’ll just raise the money and build this thing,’ it was like the ground shifted under me. It was like ‘this is what you’re supposed to do with your whole life.’ We started building before we even had the money. The money just kept coming in. It’s a good thing we did because it would be even more costly now.”

Naturally, there have been some challenges. Angela jokes, “I will suggest that no one ever hold a capital campaign and try to build anything during a supply shortage and a pandemic! But I’m happy to say that after two years and many delays, construction is almost complete and the building is completely paid for. People have been very generous with not only cash, but in-kind donations, such as the floor, the kitchen equipment, and the tables.”

First, they had to convince people that there was a need in the area and define food insecurity. Angela explains, “Being hungry is a temporary thing, but constantly worrying about where your next meal is going to come from affects your body, mind, and spirit. While there is a homeless population here, a lot of people are living just over the poverty line and don’t qualify for certain programs. Single moms, senior citizens, the working poor. A person’s circumstances can change very quickly, especially during this period of inflation.”

One of the top priorities at CGK is to extend grace, empathy and support to each guest. Their model is “dining with dignity” and includes table service, menus, and volunteer waitstaff.

“If I were a single mom,” explains Angela, “and all of a sudden had to go to a place to get a free meal, how would I feel? What can we do to make that experience less humiliating? She may have kids who are cranky and she doesn’t want to sit next to a strange man she doesn’t know. Here, she’ll have a cafe experience at her own small table with kids menus, an adult menu, and a volunteer server.”

The menus allow people to make choices about what they want to eat, rather than serving the same thing to everyone. An experienced Chef will be the only employee; all other staff will be background-checked volunteers. They won’t require guests to provide ID or to complete paperwork.

They’ll offer an Additional Services table to host nonprofits who can help with crisis intervention, transportation issues, Medicare benefits, healthcare resources for pregnant women, and more. A LifePath social worker will be on-site every evening, also.

Community Garden Kitchen aspires to be a center of hope and compassion. Barring any unexpected hiccups, they hope to be fully operational by January 2022 and they invite the Collin County community to get involved.

“There are a lot of people facing the fear and distress of food insecurity in our community and there’s no reason why they should when we have enough people that have enough money and are generous enough to make this happen,” says Angela.

Visit www.communitygardenkitchen.org to find hunger facts and a variety of ways to give or volunteer. Reach out to Angela at directors@communitygardenkitchen.org with any questions or to plan a service day for your organization. You can also listen to Angela’s story on her episode of “Getting Neighborly” the official community podcast for The Town of Fairview…Hosted by The Fairview Economic Development Corporation. On every episode, they spend time getting to know Fairview neighbors and hearing the stories that make their town a community.